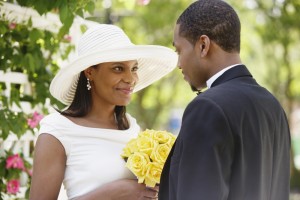 According to the Gospel of John, Jesus started his ministry with a miracle at a wedding in Cana of Galilee. John 2.

Leaving aside the jollity that no doubt followed Christ making fine grade wine available on that occasion, the fact that Jesus deemed the institution of marriage important enough to launch his three-year ministry here on earth is telling. Very telling; so telling, that, after a bit of encouragement recently, it is the all-important subject of marriage that I am choosing to launch my writing career this year.

A Today enthusiast (BBC Radio 4), I especially enjoy listening to Thought for the Day, a two-minute spiritual snack whilst sipping my first cuppa of the day. This morning was no different.

Nursing a cup of tea in my hands, Anne Atkins, a regular on the programme, started talking about cups. Spooky, I thought. But the mind of the seasoned journalist and avowed Christian was far removed from tea; one of the biggest preoccupations of the English. The cup Atkins was talking about is the sort Christ begged his father to take away from Him.

Atkins’ take on that was fascinating enough. Christ in this bout of anguish, she inferred, was more human than deity. What was even more fascinating was the parallel Atkins drew between Christ’s metaphoric cup and the institution of marriage.

To any man or woman keen to make good of their marriage she had a most telling counsel. ‘When you are wrong APOLOGISE. But when you are right, SHUT UP.  This is the exact premise upon which I have conducted myself in my marriage of twenty years. Back to front, of course.

So, marriage is a cup?  Certainly. I have many scars on my back to prove that. Nor should any of us expect anything less. Apostle Paul knew what he was talking about when in one of his famed letters to the church he said: ‘I wish you did not marry.’ I Corinthians 7:8.

Having said that, in the very same letter, one of the Bible’s most eligible (some will say incurable) bachelors said of the people who had no self-restraint; which is most of us truth be said, should get married at the earliest opportunity. Why? So that, wait for it, they don’t ‘burn with passion.’ Paul sure had a way with words.

That’s that then, right? Wrong. Warming up to his theme, Paul, in the same epistle, said: ‘Those who marry will face many tribulations in this world.’ 1 Corinthians 7:28. Adding: ‘And I want to spare you this.’ Ouch. So, never mind the fairy tale image of marriage Hollywood is forever peddling us, marriage is not a bed of roses. Is marriage then a sofa of nails? Not if Christ is at the heart of it.

In Britain today, the courts are clogged up with applications of warring couples filing for divorce. It is a measure of how far removed the country is from its Christian roots. Which brings me to Jesus’ take on marriage. One day going about His business, the Pharisees; a constant torn in His flesh cornered Christ, not on the subject of marriage, but divorce. They were a miserable lot, the Pharisees!

Hoping to wrong foot Him, ‘Moses had no issue with Decree Nisi’ they shrieked. ‘Well, I do’ was Christ’s immediate riposte. Adding: ‘therefore what God has joined together, let no man put asunder.’ Mark 10:9. And let that be a warning too to every pastor preaching heresy on the subject of Holy Matrimony from the pulpit.

There you have it, husband and wife! Tough as marriage is, God will grant you unusual grace to thoroughly enjoy yours. Amen. And to brethren seeking the joy of marriage; including those out of wedlock due to no fault of theirs, I pray God will grant the wisdom to navigate the best path for them. Amen. Amen. Most heartily, this blog is dedicated to my long-suffering wife, Abbie.