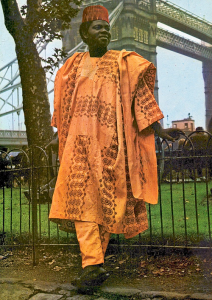 Born in England, I arrived in Nigeria with my mother and three siblings in tow at the age of six.

My maternal grandmother, a woman I loved so dearly, did not speak a word of English. She was my motivation to learn Yoruba, the language of my progenitors.

Now, Yoruba is not the easiest of languages to learn and I remember really struggling to grapple with the basics of the language spoken by more than half of the most populous country in Africa. The moment I got going however, thanks to my father, I developed an insatiable appetite for listening to Ebenezer Obey, a Nigerian musician more gifted than Mozart, Back and Beethoven put together.

This morning I woke up feeling a tad sorry for myself. After my morning devotion, I only felt marginally better. Then I had the mind to listen to a man whose army of fans delight, no doubt due to his prowess and genius, in calling him ‘Chief Commander’.

Listening to Ebenezer Obey’s ‘Mukulu Muke Maajo Folorun Mi‘ (It is with joy and fanfare that I will dance in praise of my God) this morning, I stumbled on something the Juju maestro he said in passing that caused me to shed tears of joy. ‘Igbagbo ninu Jesu; kii doju ti ni.’ As a Yoruba linguist in the UK for the past 25 years and with a client base that includes Scotland Yard and the Old Bailey, I am not even entirely sure I can do justice to this statement. But I’d like to have a go: “faith in Christ is immunization against shame.” Oh, shame is a disease alright, friends!

As far as translation goes however, that is the best I can come up with. Of course I will be the first to admit that for a statement laden with so much wisdom, my offering is no more than the peeling off of the first layer of a huge onion. So, let us put this theory to the test.

Strangely enough, it was three breath-taking accounts of deliverance that I read in the Bible at my quiet time this morning. The first being the epic story of how God miraculously wasted the Egyptians, the enemies of Israel, at the Red Sea (Exodus 14).

It was a victory so profound, that, Moses and his compatriots, in a frenzy of gratitude declared: ‘Who is like you, O Lord, among the gods? Who is like you, majestic in holiness, awesome in glorious deeds, doing wonders?’ (Exodus 15:11). What has Christ got to do with God, somebody asks? Quite a lot, as it happens. But let’s park that for now, and move on swiftly to the two other textbook accounts of heavenly deliverance I read this morning.

I am talking of course of the miraculous accounts of the eleventh hour deliverance of Peter from Herod’s evil plans by the Heavenly Special Forces (Acts 12). A feat so incredible (literally), that, when Rhoda told the brethren, who had been praying for Peter’s release, that he was actually at the door, they declared her clinically insane. And then that of Paul and Silas, who, after receiving the mother of all beatings, and slung in prison, found nothing better to do with their time than sing and give praises to God (Acts 16). It has to be said, the early Christians were made of stern stuff.

I mean, even God was so impressed, that, He shocked and awed the captors of the two apostles into giving their lives to Christ. And while He was at it, their families too!

Brethren, I have a confession to make. You know, I am not entirely sure the Israelites believed in God much. I mean their constant whining in the wilderness despite all God had done for them is a huge testimony to this claim. But while the faith of the children of Israel was fickle at best, Peter, Paul and Silas, were what you’d call hard core believers.

And without mincing words, so is Ebenezer Obey too. In my considered opinion, Ebenezer Obey, an artist now in his 70s and working as a full time evangelist for Christ, is a first rate believer not only for coming up with a statement so powerful in its simplicity that it has inspired one of my best blogs ever, but crucially for unwittingly using the medium of his God-given talent to encourage my continuing faith in Christ. That Evangelist Obey achieved in one throwaway comment what Apostle Paul, my mentor and hero, did in many epistles and over many years, is truly the stuff of genius.

‘I am not ashamed of the gospel of Christ; it is the power of god to salvation‘ (Romans 1:16) is the pivot upon which my life rotates. Thanks to Ebenezer Obey, it is nice to know that as I continue to assert my belief in Christ, the Messiah of the universe is breaking His back covering my own shame too. A most comforting thought!

During the 1992 presidential campaign in the US, Bill Clinton and his opponent, President George H Bush, were asked what they felt the biggest problem facing the country was. Bush, the erstwhile US Ambassador to China and former head of the CIA riding high in the polls at the time and on the back of winning the first Iraq war, gave a tour de force on foreign affairs. Clinton, everybody thought, was dead in the water.

But the moment a man who was soon to become the youngest US president since Kennedy got to the podium, he uttered four famed words which, in penetration and impact, had the same devastating effect David’s slingshot landing on Goliath’s forehead had. ‘It’s the economy, stupid!’

Brethren, if like me you confronted by insurmountable odds threatening to pull the rug from under your feet? What you need is Christ, Stupid! ‘Christ in you, the hope of glory‘ (Colossians 1:27). Better words have never been spoken.