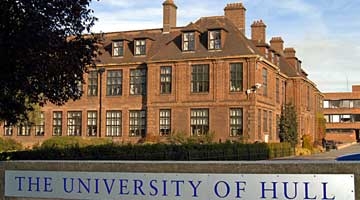 The news that Hull has been nominated the UK city of culture for 2017 fills me with joy. In a stiff competition between Swansea, Leicester and Dundee, Hull, describing itself in its bid as ‘a city coming out of the shadows’, was the judges’ unanimous choice.  True enough, Hull may have once been the poorest blot on the European landscape and indeed not long ago, the continent’s capital of teenage pregnancies. This latest news about the North Eastern English metropolis however rather brings back fond memories of my time there as a graduate student more than 20 years ago.

I remember many pleasurable rides on my pushbike in the town, and surviving to tell the tale despite many crazy stunts that truly make me shudder now. Living off campus, I remember endless conversations (arguments, is probably a better word) between me and my four English housemates about the problems of the world and how to put them to right. I remember being particularly struck by their visceral hatred of anything American. Whatever happened to the special relationship … Talking about relationships however, it was whilst in Hull of course that I proposed to my fiancée of two years. My 22nd wedding anniversary only but a week away, Hull surely has played a significant role in my own, how shall I put it, special relationship!

I remember the parties and often finding myself being stirred by a spirit – not the ‘Holy’ variety mind you. My interest in politics predates my coming to live in Britain but it was 1992, in Hull, that I broke my duck as a political activist, leafleting for Kevin McNamara (the incumbent MP at the time) and getting the Labour message out to anybody who cared to listen. I had dreams of Neil Kinnock making it to No 10. I remember also my tears, and that of many others, when those dreams failed to materialise; and John Major remained in power for another five years. New Labour of course later decimated the Tories at the polls (1997), but the gloom of the loss of 1992 had a most profound effect on me.

And finally, it was in Hull that I made the acquaintance of the editor of this august publication. A good friend of over 20 years since, as a matter of fact my first son is named after him. Honestly, I can go on and on, but let me cut to the chase. To His disciples, Christ said: ‘I am the light of the world: he that follows me shall not walk in darkness.’ John 8:12. These words are uppermost in my mind as I congratulate the good people of Humberside on their great achievement this morning.

My heartfelt prayer is that as Hull emerges from the shadows of darkness, it will truly become a glorious beacon to the nation, and the world too, like William Wilberforce. William Wilberforce, the British politician and anti-slavery leader was of course an indigene of Hull.