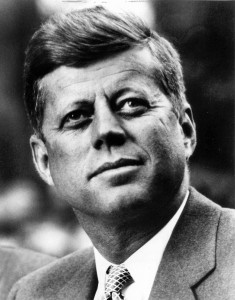 On this day 50 years ago in Dallas, Texas, President John F Kennedy was killed by an assassin’s bullet.

The death of Kennedy in a way marked the death of hope and innocence. In the past half a century, on both sides of the Atlantic, we have had instances when it seemed the spirit of Camelot (hope and innocence) was resurrected – there was Bill Clinton in 1992, Tony Blair in 1997 and Barack Obama in 2008. But any hope that any of those dawns brought, was soon lost in a fog of hubris or shenanigans – sometimes both.

Kennedy was no ‘choir boy’. There were the affairs – famously with Marilyn Monroe – and there were also allegations of Kennedy’s unhealthy cosiness with the mob. But unlike many of his successors, Kennedy was not only all talk. He actually used his brief spell in the Oval Office to bring about lasting change. What is this lasting change, you ask? Civil Rights of course.

This year we commemorated Dr Martin Luther King’s million-man march on Washington and his ‘I have a dream’ speech. If Kennedy, after persuasion from his brother Bobby, the Attorney-General, had not endorsed the march even against the siren of opposition from J Edgar Hoover and the FBI, King’s dream may well come to nothing.

I think John Fitzgerald Kennedy cared about Civil Rights above all else because he was an outsider himself. Yes, he was the leader of the free world, a man of Irish descent, and the first and only Catholic president. Being an outsider however does not automatically translate to caring about issues of fairness and justice. While in college, Kennedy wrote his first book, ‘Profiles in Courage’. It was courage, indeed moral courage that Kennedy demonstrated in office that has made him such a revered historical figure today. May his soul rest in peace.