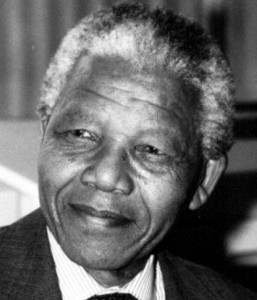 In the latter part of 2013 the media networks would time and again give an update on the flailing heath of Nelson Mandela who died on 5th December 2013. It has always intrigued me when an elderly person at their point of death seems to linger a little longer as if there is one last thing they must do.

When Joseph brought his sons Manasseh and Ephraim to the ailing Jacob as he lay on his death bed, it is said he rallied up his strength for one final act of blessing them. (Genesis 48:1-2). About 2000 years ago, the elderly Simeon lingered long enough to see the promised Christ child. And when he did he praised God and requested to depart in peace. (Luke 2:28-35). Considering the man Nelson Rolihlahla (trouble maker in the Xhosa language) Mandela in the light of Jacob and Simeon, it is fair to assume that his lingering was to perform one final act. What was that final act?

I found it rather interesting that the life of Mandela mirrored the life of Joseph as we shall see.

Before he was mocked for his dreams Joseph was already a trouble maker (a rolihlahla) for he would give a bad report on his brothers to his father (Genesis 37:2). And so when he shared his cosmic dreams of prominence over his brother and his family, his brothers hated him even more and mocked him as the dreamer. Mandela from a tender age had dreams of a free South Africa where its citizens lived in peace and equity. And those who perpetrated the apartheid movement hated him for what he envisioned. When the opportune time came someone would attempt to suppress these dreamers and their dreams.

So when Joseph’s brothers saw him afar off they said to each other, “Here comes that dreamer let’s kill him and throw him into one of these wells and let’s see what becomes of his dreams.” (Genesis 37:19-29)  And so begun Joseph’s downward spiral from pit, to slave, to prisoner. The Rivonia trial found Mandela and others guilty of sabotage and were sentenced to life imprisonment.  And in 1964 Mandela became Robben Island’s 466th prisoner (hence Prisoner No 46664) where he spent 18 of his 27 year imprisonment.

I am certain that during his trial and imprisonment, he was continually mocked by those who supported apartheid (in a thick Afrikaans English accent for effect), “Throw Mandela in prison! Let him rot and die there and let’s see what becomes of his dreams of a free South Africa!” And in indeed it seemed for the ‘dreamer in Cairo’ and the ‘dreamer in Cape Town’ that their dreams were being snuffed out and their oppressors triumphant.

We know that is was as a result of Joseph spurning the overtures of Potiphar’s wife that he was imprisoned. To succumb to such overtures he said is a sin against God (Genesis 39:9). I however find Mandela words during the Rivonia trial speaking for both the dreamer in Egypt and the dreamer in South Africa and to us today. And it is the principle that whether one is resisting the temptation of immoral choices to honor the Lord, in the case of Joseph, or pressing for equality and justice for all, in the case of Mandela, that these are ideals we hope to live for and achieve. But if needs be these are ideals for we must be prepared to die for!  Additionally at his trial Mandela also spoke passionately of the preservation of the African family where children were raised by both parents which the apartheid movement sought to destroy. By rejecting the sexual overtures of Potiphar’s wife Joseph preserved the dignity of that family!  And so the preservation of the family unit was important to these dreamers.

Both Mandela and Joseph became leaders of other prisoners during their incarceration. But what became of their dreams? For Joseph he became an interpreter of dreams. For Mandela, his dreams was taken up by other activists right across the globe who pressed for a free South Africa

The seven part documentary series ‘Have You Heard from Johannesburg‘ (Clarity films 2010) best captures the intrigues, creativity, perseverance, pain struggle, hurdles and triumph of the anti-apartheid movement over a 50 year period. To watch this series, is to see men and women emulate the David the giant slayer in action in diverse and cunning ways and succeeding at every turn. Sometimes facing major setbacks but never giving up. For these modern-day Davids, just like the maidens sang of David that they too claimed “their tens of thousands,” (I Samuel 18:7) winning many over to their cause.  (Grateful to the BBC for airing this series in May/June 2013)

And then one day two men worked out of prison, one in Cairo and another in Cape Town and went on to become leaders of their respective nations. And to understand what unjust incarceration does to the soul is to consider Mandela’s views in this matter because in this regard, I believe he reflects Joseph’s experience as well. Mandela observed that “imprisonment makes a person measure himself not by external accomplishments rather by internal ones; such as honesty, sincerity, simplicity, humility, generosity and an absence of variety”.  For it is this internal re-calibration that could begin to explain why he and Joseph emerged out of prison without any sense of bitterness or hatred for their oppressors rather overtly and demonstrably reconciliatory.

For Joseph in reassuring his brothers that he bore no ill will towards them said:

“Don’t be afraid…you intended to harm me, but God intended it for good to accomplish what is now being done, the saving of many lives. So then, don’t be afraid.” (Genesis 50:19-21).

In similar fashion Mandela also reached out to the minority white community. In the 1995 Rugby World Cup in South Africa Mandela rallied the nation of South Africa behind the Springboks who went on to win in an epic final over New Zealand. Of this win, former President de Klerk would later say on that day that Mandela had won the hearts of millions of white rugby fans. He also got black South Africans to love a sport they had come to loathe for its associations of the apartheid regime.

And on 5th December 2013 Nelson Rolihlahla (trouble maker), Mandela breathed his last. The trouble maker of South Africa lived long enough to see the oppressive apartheid system crushed and his beloved South Africa attain the democratic society he envisioned. And today we honor his memory and celebrate his life. In addition like Joseph, both these dreamers, prisoners and reconcilers long enough to see their great great grandchildren (Genesis 50:23).

And to the question why is it sometimes the elderly like Jacob, Simeon and now Mandela linger for a while before they die?  They linger so as to pass the mantle of the vision and task to the next generation.