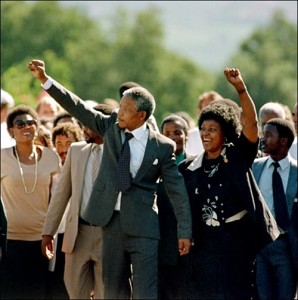 Just as I had imagined it, the death of Nelson Mandela has provoked a most extra-ordinary reaction. On the night his death was announced, Barack Obama, standing at the lectern at the Rose Garden in the White House, said: ‘he is no longer with us; he is now with the ancients.’ That sure brought a lump to my throat. Leaving aside the selfie (Obama and Cameron’s indulgent antics with Helle Thorning-Schmidt, the Danish Prime Minister) the US President’s claim at Mandela’s memorial service a few days later in Soweto that a titan, whom he adoringly called Madiba, inspired him to be a better man, was another tear-jerking moment for me.

‘A light has gone out.’ David Cameron, the British prime minister, said in front of No 10 the night Mandela’s death was announced. Is this the leader of the same party whose leader once called Mandela a terrorist; a party whose youth in the 1980s used to wear with pride a tasteless ‘Hang Nelson Mandela’ badge? Well, at least Cameron had the decency to apologise for Mrs Thatcher’s terrorist slur. Many however have described his gesture as crocodile’s tears.

By far my favourite eulogy of Nelson Mandela was that of David Lammy’s, the young Labour MP for Tottenham. On Newsnight, the BBC current affairs programme, a man once described as the heir to Tony Blair, movingly took the nation back to his childhood. He was brought up by a single mother. Eager for a father figure in his life, he had the portraits of Nelson Mandela all over his bedroom wall. ‘Mandela was a surrogate father to me.’, he volunteered at which point I felt tears streaming down my face. Lammy had by no means finished. ‘When the dust settles on the history of the 20th Century’ he said, ‘for infamy and abject wickedness Adolf Hitler will be on one side of the ledger, and for self-sacrifice and an unrivalled capacity for tolerance and forgiveness, Nelson Mandela will be on the other.’ If he continues like this, the ex-Harvard law school graduate, like Obama, will soon be running the show in his own country too.

Of course, I have my own views on Mandela. But waking up the next morning, still unsure how best to word my lasting impressions of one of my five favourite men of all times (Christ and Apostle Paul being at the top of that list), I made my way to the newsagent. So, what was Fleet Street’s take on the demise of Nelson Mandela, the giant of our age?

‘Mandela Dead – The World Mourns As Anti-apartheid Hero Dies at 95.’ (The Mirror, Front page splash) Not to be outshone, Sun, the newspaper with the largest circulation in the country said: ‘Mandela Dead – Anti-apartheid Warrior Loses His Final Battle.’ (The Sun, Front page splash)When The Star, notorious for bearing women’s bosoms on its front page, eschewed that frivolity for decorum and claimed: Mandela Dead at 95 – The World Mourns Freedom Fighter, it truly felt like the end of an era and the beginning of another one.

Express and Mail are not redtops. Although tabloid newspapers, they cater for the appetite of a more serious readership with a Right Wing bent. Now, Mandela, politically-speaking, may not have been their cup of tea, but you wouldn’t recognize it from their headlines. ‘Nelson Mandela dies at 95- Nations Join South Africa in Mourning the Leader Whose Forgiveness Inspired the World.’ (Daily Express, Front page splash) ‘Death of a Colossus – Mandela, Giant Who Taught World Meaning of Forgiveness, is dead at 95.’ (Daily Mail, Front page splash) – You couldn’t make it up!

The heavies, once collectively described as the broadsheets, simply dispensed with words altogether. The Times, The Independent, The Guardian and The Telegraph cleared all their front pages for huge portraits of Nelson Mandela, only bothering to add the world’s foremost statesman’s timeline – 1918-2013. Of course the newspapers for the more cerebral had enough articles in them about the life and times of Mandela to wipe out the entire Rain Forest.

And finally, The Financial Times, a newspaper that once most alluringly described itself as ‘No FT, No Comment’ in characteristic fashion showed independence of spirit. Breaking away from the pack, on its own front page it claimed: ‘Mandela: The Inspirational Father of South Africa’s Rainbow Nation Dies at 95.’ If memory serves me correctly, in all the 25 years I have lived in the UK, only the deaths of Lady Diana and that of Lady Thatcher have obliged all the 10 British national newspapers to splash on a story. It is the measure of a man who rose from humble circumstances to bestride the world, in the immortal words of Shakespeare (Julius Caesar) and Daily Mail, like a colossus.

In the end, it is my own thoughts about Mandela that I must turn to. I remember September 1977 well. It was the month and year that I started secondary school; a milestone that coincided with the killing of Steve Biko. That was my first introduction to the heady politics of South Africa.

And as I made my way through the five years of secondary school, I found that apart from the transatlantic slave trade; probably the worst crime ever known to mankind, nothing made my blood boil more than the thought of fellow Africans being treated worse than second class citizens in their own country.

Mandela, the totemic figure of the pernicious apartheid regime, was eventually released in 1990. I remember watching him on TV in London walking out of prison with his second wife Winnie Mandela that fateful spring morning, and thinking: ‘Blimey! This man has been in prison longer than I have been alive.’ And at that time, not only had I finished my university education; I had even begun to make my own way in the world.

I only saw Mandela in flesh once. And that was during his state visit to the UK as the first black president of South Africa in 1996. Amidst a throng easily in the region of hundreds of thousands, standing on top of a red telephone box in Brixton, I saw the great man at the back of a Rolls-Royce accompanied by a bewildered Prince Charles, waving at a very excited crowd. His dignity was almost divine. Notice, ‘almost’ I say, a far cry from the divinity of God or of His Son, Jesus Christ.

Yet, I have over the years met a few people, not least Ann Clywd MP, my one time boss, who although did not believe in God, worshipped the very ground Mandela trod on. It’s a sort of adulation I am sure the man would have repudiated. I certainly do. That said, as an African, nobody has made me feel as proud of my heritage as Nelson Mandela has.